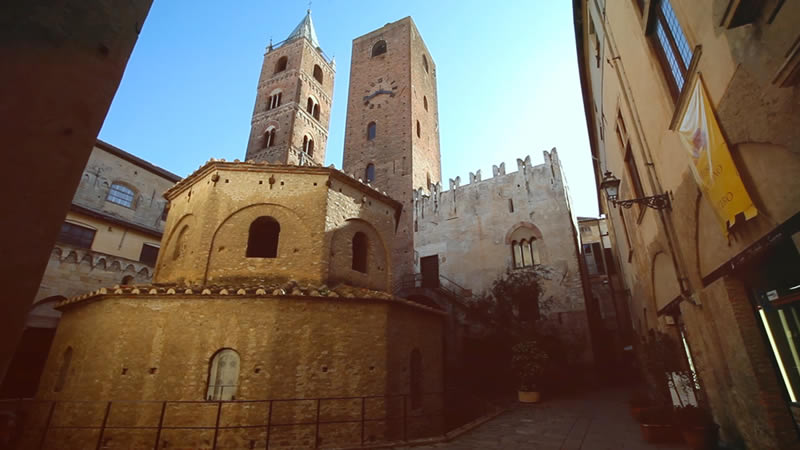 ALBENGA: CITY OF HUNDRED TOWERS AND FLAVOURS
A destination to discover slowly

Its history is lost in the mists of time, the great plain was home to the Sapiens who went to hunt in the Pennavaire Valley, then the Celts who fought with the Carthaginians against the Romans, who settled in Albenga, a city of a hundred towers (from here the name of its river Centa, the shortest Italian river) and gateway to its valleys, Pennavaire, Arroscia, Neva and Lerrone, rich in history, landscapes, nature and flavours.

A city on a human scale, famous in Italy and in Europe for its vegetables, its flowers, its aromatic plants and its old town, the second largest in Liguria after Genoa.

Its old town is truly amazing for its historical, archaeological and naturalistic heritage, perfect for “slow” tourism, for “getting lost” among the alleyways, streets and squares, for a stop in one of the countless places to discover at every corner of this precious treasure chest, a treasure of art, history or architecture …

… to access from one of the historic gates to the medieval town and to be in front of the marvelous Cathedral of San Michele, whose base is located below the current level of the city, since the Centa with its floods has brought such sediments over the centuries that have raised the pavement of the town … turn the corner and find yourself in front of the 5th century Baptistery, one of the oldest in Christianity.

Walk up the nose and admire the noble, medieval and seventeenth-century buildings that tell stories and lives of people like the Fieschi, the Borea Ricci, the Lengueglia and the Costa del Carretto; bump into ancient convents, oratories and museums, from the naval one (guardian of the remains of a Roman ship sunk off the Gallinara island) to the Roman one with precious testimonies of the imperial and prehistoric splendor with finds from the Pennavaire Valley and the splendid collection of ancient Phoenician working glasses (the ancient Blue Plate is famous). Take the time for a visit to the Diocesan Museum, a true safe of sacred art or for a short visit to the Museum of the oil and the rural civilization set up by the Sommariva family inside the walls, right next to the centuries-old oil mill.

Allow yourself another stop for a slice of Farinata accompanied by a glass of Pigato or Rossese di Albenga, for a strictly British brunch, a piece of cake with English tea or a fruit centrifuged, for a beer with apetizer in one of the numerous and picturesque breweries or for a cocktail by the sea.

Albenga, however, is not only its historical center, walking towards Pontelungo (built around 1200 on the ancient course of the Centa river) an excavation shows the remains of the Basilica of San Vittore dating back to the IV or V century as the Baptistery, crossing the red bridge on the Centa, you can admire the ruins of the ancient Roman baths and upstream the remains of the Basilica of San Calocero martyr. From here you can retrace back to Alassio, the Via Julia Augusta (see previous article) with the remains of a Roman amphitheater, the ancient cobblestone and the Roman columbarium tombs.

We return to the city and walk along the tree-lined Martiri della Libertà with its lush and fragrant lime trees and admire the elegant Liberty villas of the early 1900s, when you arrive in Piazza Europa you can visit the ancient sighting fort, built by the Dorias and facing the Gallinara Island. This is the district of the summer, of seaside tourism, of campsites and equipped beaches.

If you want to stay in the slow tourism mood, you can organize a trip to the “Piana”, the agricultural heart of Albenga, homeland of Pigato, Vermentino, Rossese cellars, wines that blend well with the agricultural excellences of this territory.

Which? I QUATTRO DI ALBENGA: the tender and crunchy spiny artichoke, the violet asparagus (now Slow Food) the fleshy and tasty Cuore di Bue tomato and the tender courgette- Trombetta. Foorf excellencies exported and known throughout Europe, such as local flowers (cyclamen, briantemi, orchids and geraniums).

But slow tourism is not just gastronomy or art, it is above all conscious, curious and sporting tourism. And if of course there is no lack of the possibility of practicing all kinds of water sports, currently other outdoor sports such as cycling in all its forms, trekking and orienteering, climbing in the upper Val Pennavaire, paragliding and horse riding are increased.

In short, a slow tourism, to be discovered like its artichokes: leaf after leaf
~